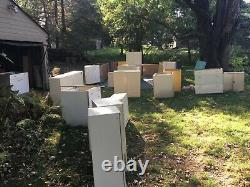 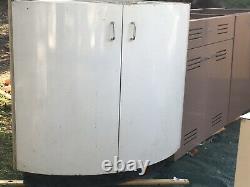 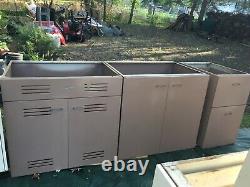 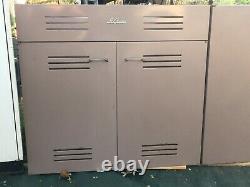 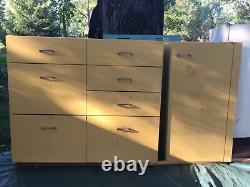 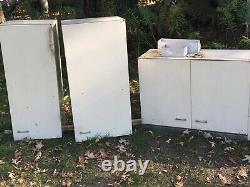 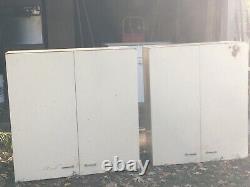 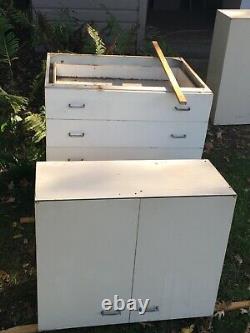 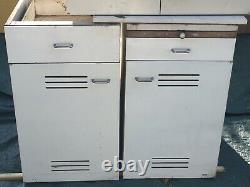 The length of the wall with the oven is about 11 ft 8 inches and the portion with the uppers is about 7 ft 8 inches of that. BTW, the oven appears to be original and works fine.

It is included if you want it. The uppers along the wall where the frig is are about 6 ft 6 inches. The lowers where the kitchen sink is are about 7 ft 3 inches, but that includes the opening for the dishwasher.

As far as rust goes, there is some very slight rust inder the sink, but that is minimal. Other then that, there is no rust. The cabinets show very limited wear.

The original owners had one child and divorced soon after the house was built. The second owners had adult children, who never lived in the house. We are the third owners and have lived here about 2 years.

The cook top in the island was not original and was poorly retro fitted in. We removed the control panel and had a metal box made and fitted in the opening. That area would need to be painted. The notes from the set out of River Falls Wisconsin: These came out of the Charlie Ward (former president of Brown & Bigelow) house in/near River Falls Wisconsin. Supposedly he hosted big parties there and Marilyn Monroe attended some of them. These are the cream colored lowers only. This is from a smoke-free, pet-free home. This item is in the category "Antiques\Furniture\Cabinets & Cupboards".

The seller is "chowell-2007" and is located in this country: US. This item can be shipped to United States.